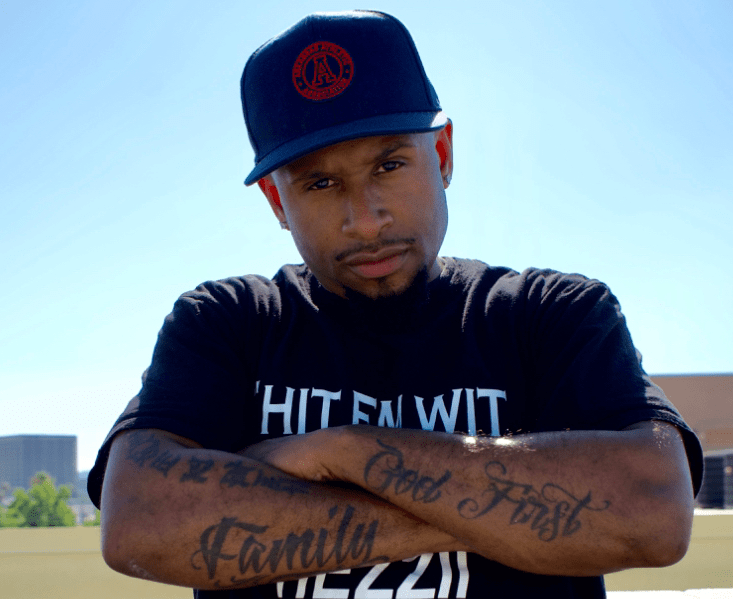 (Photographed in Los Angeles California. G-Wayne's secret to success lies in his willingness to love and embrace his roots.)
By Aziz M. Bey August 28, 2019

Comedic genius. The mastermind behind G.Waynetv takes a Victory Lap

Few men in the world of comedy are as locked into the temperament of their character as the Californian native Gerald Herring. In My L.A. Hood Stories, he narrates his story from a tone that delivers color, detail and blistering laughter to a world of gang violence and gun crimes. It is difficult to imagine any actor that has come from more humble origins to capture our hearts than our leading man, Gerald Herring.

The oracle of comedy relishes the process of putting together a great story: Relentlessly tinkering with the story structure and post production. He levies a standing challenge in his editing process to see what he can get away with in his voice-overs. “When I make an hour of video, I want to tell the story in a new and refreshing way,” he explains.

Depending on your taste for black humor, witty or crude jokes —My L.A. Hood Stories is a call to embrace life while we have it. Color me shocked.

Rambunctious player “G” (Gerald Herring), after appearing in the hit series “The Lesbian Homie,” stars in a very funny series chronicling his teenage years in the predominantly ‘CRIP’ section of Los Angeles.

G spends his days hanging out with his buddy’s Tim (Tim Willy) and Keewon (Keewon Vines) fighting gangs and running from his ghetto and overzealous girlfriend Kesha. Kesha, who somehow tracks G down at his new residence, doesn’t quite grasp the idea that G isn’t interested in her in any capacity.

While on a search for weed in his new neighborhood, the crew encounters another peculiar character, Devante, who introduces G to his beautiful sister Ramona, played by Blaire Najal.

Ramona instantly captivates G’s romantic interests. Everything is going well until Kesha tracks down the two sharing a single ice cream cone at Sno-Balls on West Slauson Ave. What happens next? — well, no spoilers here.

My LA Hood Stories is currently on Episode 9 and exclusively on his channel – G.Waynetv

“I wasn’t hood, but I was never afraid. I thought I was the hardest 13-year-old boy ever!”

Long before his teenage years, Gerald’s childhood was rife with gun violence and bullying. Dodging gunfire was a daily occurrence and if you exhibited fear, you made yourself an easy target.

“I wasn’t hood, but I was never afraid of the hood. I thought I was the hardest 13-year-old boy ever”- proclaims Gerald on a raw, cloudy August afternoon.

His mother was the classic over-protective parent. Nicknamed, “Safety Nay-Nay,” she recognized Gerald’s gift for performing when he mimicked the elders at family reunions. Gerald’s mother saw this as an opportunity to protect her son from the streets and explore her son’s affinity for entertainment.

She exuberantly enrolled Gerald into the ‘Tracy Michelle Agency.’ It was here that Gerald developed his acting techniques and on-camera chemistry.

Mother’s efforts soon paid off when Gerald scored roles in hit sitcoms such as “The Fresh Prince of Bel-Air” and nationally televised commercials such as “Burger King.”

The future was bright for the child actor, but would soon come to an abrupt halt. In 1994, Gerald left Los Angeles to move in with his uncle in Riverside, California.

Unbeknownst to Gerald, this move was an unexpected pleasure. Gerald was granted unprecedented freedom and escapism, unlike anything he’d experienced growing up in Los Angeles.

However, this did not cure Gerald’s mom of her unrelenting paranoia. She called her brother daily inquiring about the where-a-bouts, academic progress and social life of her son. Unfortunately, her brother often had little to no information to report.

“My uncle would not divulge anything,” he says with a still-distinct Californian accent.

After a year, Gerald’s mother had had enough. Gerald moved back to Los Angeles and enrolled him into Verbum Dei catholic high school on South Central Ave.

Back in L.A. was exactly what the doctor ordered for us My L.A. hood Stories junkies. Gerald was back into the violence, the bullying, the shoot-outs and of course the girls. He completed his sophomore and junior year at Verbum Dei until a 1996 summer visit with his father near Dallas, Texas.

This visit was eerily similar to his time at Riverside. Stress-free, open-space, and a new face for the local girls. Just one exception – This wasn’t his uncle’s supervision.

Gerald’s dad was a strict disciplinarian. Traveling often for work, Gerald’s father did not have the time to micro-manage his son with the same fortitude as his mother.

“Yall are men. I shouldn’t have to stand over you like your momma. If the teachers call me with some bullshit, I’m fucking you up,” declared his dad.

Gerald perfectly acquiesced. He graduated Rockwall high school the following spring and immediately moved back to L.A. to resume his acting career.

Journey back to the top

It didn’t take long before life dealt Gerald another change of direction.
In 1998, Gerald and his fiancé welcomed their first child together. With a new family on the horizon, a steady paycheck took precedence over the unpredictability of an acting career. The couple married in 1999 and Gerald took a warehouse job at QVC.

From QVC Gerald went on to a larger company, Arkwright. At Arkwright, he received a promotion which enabled him to provide a modest living for his family. In 2004, Gerald discovered his most lucrative line of work to date, real estate.

It was the height of the sub-prime lending era and loan officers were earning hefty commissions off the millions of borrowers looking to stake their claim in the American dream.

There was a loan product for everyone, including a “no-income-verification loan.” Simply put, banks did not require any proof of income from borrowers. Gerald precipitously found himself making an upper-middle-class salary.

“I was making $5,000 in less than 4 days.” He admits with his iconic Floyd Mayweather smile.

Unfortunately, the good times did not last. The housing bubble burst and once again Gerald was out on the streets looking for work. Finally, in 2009 he landed a job doing familiar work with a familiar company, Microsoft.

From married to single

Homelife wasn’t so pleasant for the My L.A. Hood Stories star. With sixty-hour workweeks and two new additions to the family, Gerald found little time to devote to his wife and children.

“I was at a crossroads in my life,” he says. Gerald admits that his divorce brought on depression, especially after learning the identity of his ex-wife’s new lover.

“I was sick with love. Heartbroken. I didn’t know what I was going to do next.”

One day, while the kids were visiting their mother in Oakland, Gerald had an epiphany. “Why not use this opportunity to get myself back on the big screen?” he gasps with a euphoric glare in his eyes.

In 2015 Gerald drove from Ontario to Los Angeles to visit The Sketch House. The Sketch House is where all of the Valley’s most talented artist comes to shoot their videos.

This is where Gerald met Big Jah, Clayton Thomas, Ayo Minks and a host of other heavy-hitting comedic actors and actresses. The Sketch House was located in the Hollywood area, but Gerald knew to tell his story, he needed to be back in the hood.

With wars between the Blacks and the Mexicans reaching a fever pitch, Gerald opened his Brick House just four miles from where he grew up.

In 2016, Gerald used the Brick House to mark his official return to show business. “I had no fear, I shot My L.A. Hood Stories right in the Hood,” He says with no hesitation.

However, the journey back to acting could not be fully realized living in Ontario, California. “I needed to be submerged in the culture and no one wanted to drive from L.A. to Ontario, to collaborate with me,” he asserts. So Gerald completed the Tour De Force and permanently moved back to Los Angeles.

By now Gerald has reached a point where almost anything he can dream up is within reach.

The women he dates are typically not of the industry and struggle with his on-screen persona with his female co-stars.

The envy was on full display one evening while out in the city celebrating another successful shoot with his My L.A. Hood Stories co-star. “I was hanging out with her and my phone went off. It was a text from my ex,

‘You bitch ass nigga’,” Gerald exclaims with a jocular disposition.

Gerald showed his co-star the text message and she responded, “She’s Trippin.” Then Gerald received a follow-up text from his ex-girlfriend threatening to slide into his co-star’s DM- which she did. “He doesn’t like you. G says you like him and you invite yourself over all the time and he still having sex with me.”

His co-star responded with a bewildered look on her face- “Is this true? I don’t even know how to feel right now.” Gerald responds, “Does it matter? You said we were just friends- you not looking to date anyone.” Co-star fires back-

“Well, technically we are dating. We spend all our free time together when we’re not filming.”

Gerald cannot believe what he was hearing, “We already spoke about it and we both agreed being in a relationship ain’t gonna do nothing but stress each other out.”

You would think this is the latest edition of My L.A. Hood Stories, but it is not. Blurring the professional dating lines often happens when you are a burgeoning Hollywood star.

As for the future, Gerald foresees steady growth as an actor and plans to produce a LIVE stage rendition of his My L.A. Hood Stories.

Gerald has recently signed with “Impact Talent Group” and aggressively working on getting his own televised sketch comedy show. Interestingly, Gerald is sensitive about being pigeonholed into the genre of comedy. During his downtime, he practices roles that are more cavalier and dramatic. “Every day I practice Leonardo DiCaprio lines in the mirror.”

Retaining the integrity of his craft is more important than the bottom line. “That aspect of my career will never be compromised.” PT